The bluespotted ribbontail ray (Taeniura lymma) is a species of stingray in the family Dasyatidae. Found from the intertidal zone to a depth of 30 m (100 ft), this species is common throughout the tropical Indian and western Pacific Oceans in nearshore, coral reef-associated habitats. It is a fairly small ray, not exceeding 35 cm (14 in) in width, with a mostly smooth, oval pectoral fin disc, large protruding eyes, and a relatively short and thick tail with a deep fin fold underneath. It can be easily identified by its striking color pattern of many electric blue spots on a yellowish background, with a pair of blue stripes on the tail. 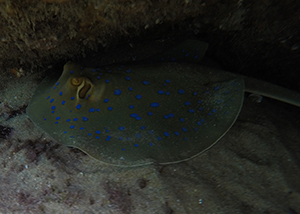 Imagine our surprise to find one of these cool rays in the rock pools… Ok so, to long time divers and snorkelers this is most probably a common sighting. But you can think of us as part time tourists, full time locals. We are like new born’s or toddlers to all the wonderful things Sodwana Bay has to offer. Curious about everything shocked about all the dangers that actually lurk in the rock pools and appreciative that nature respects you as long as you respect it.

This one happened a while ago, Tom and I went to swim in the rock pools during low tide. It wasn’t super low so some pools could be really deep. Tom spotted a ray under one of the rock ledges submerged under water. He only saw a glimpse of it and used the GoPro’s selfie stick to get a closer shot of it. Unfortunately the GoPro malfunctioned and instead of taking a video of it, it took a series of photo’s, almost like a time lapse. So unfortunately, unless we find another one there will be no video for it.

We were super surprised to find the gorgeous ray when reviewing our footage. Tom actually thought he captured a moray eel on film. Imagine his surprise to find that it wasn’t a moray eel but rather a Blue-spotted ribbontail ray. While filming he was only able to see the tail which at first looked like a stick till he took a closer look, but only saw his full photo prey when we got home…

Some interesting facts about the Blue-spotted ribbontail ray and what it looks like:

They are super gorgeous and cute, their faces are so cute by my standards!!!!

Like most creatures they too are brightly coloured to warn of how venomous they are, the have one large and one medium sized – highly venomous spines on their tales. Although they are very shy and will rather swim away to avoid conflict than stick around and fight…

It’s bright yellow eyes enhance its vision and allows them to see behind them without turning their heads. Sort of like a chameleon, chickens can also see 360 degrees…

Blue-spotted ribbontail rays have been recorded from southern Africa and the Red Sea to the Solomon Islands. It is found primarily in the Western Indo-Pacific. T. lymma has also been recorded in Australia in shallow tropical marine waters from Ningaloo Reef, Western Australia to Bundaberg, Queensland.

Like a typical Ray, they love to play hide and seek under the sea sand, waiting for their prey to swim by and get snatched by the prettiest ray I have ever seen so far! The one we caught on camera must’ve been moving position or unveiled by the tide that it was so in the open, or maybe just not hungry?

Another common habitat for them is reefs in low waters. They have also been sighted in shipwrecks. If I was a marine animal that’s where I would live, in a shipwreck, abundant food easy place to hide, perfect habitat.

Some people try to keep these poor creatures as aquarium pets, please don’t they are poorly suited for aquarium life, I don’t think any aquarium will be enough for them except the open oceans.

Unlike sharks which have teeth, all rays have powerful plate like jaws that crush their prey to death and I would assume sometimes they might even swallow their prey whole?

During high tide, they migrate in groups into shallow sandy areas of tidal flats to feed on sand worms, shrimps, hermit crabs and small fishes. At low tide, they recede back into the ocean, usually alone to hide in the coral crevices of the reef

Their main natural predators are often the hammerhead shark and the Orca/killer Whale that preys on their young.

This website uses cookies to improve your experience while you navigate through the website. Out of these cookies, the cookies that are categorized as necessary are stored on your browser as they are as essential for the working of basic functionalities of the website. We also use third-party cookies that help us analyze and understand how you use this website. These cookies will be stored in your browser only with your consent. You also have the option to opt-out of these cookies. But opting out of some of these cookies may have an effect on your browsing experience.
Necessary Always Enabled
Necessary cookies are absolutely essential for the website to function properly. This category only includes cookies that ensures basic functionalities and security features of the website. These cookies do not store any personal information.
SAVE & ACCEPT
Please contact us for more Information...