For those who follow our blogs you must’ve read the article about the cute small Snowflake eel.. They may be ankle biters, but no real harm will come from them, especially that they are so small and are super shy rather choosing to flea then attack!

Well our solution was to flee to the nearest, shallowest smallest rock we could find!

Ok, let me reverse too the beginning!

We were on our way back to shore after experiencing a super awesome neap tide… The water was only 0.3 m high in low tide and was the shallowest we have ever seen in Sodwana! It was already quite an eventful day, we found a puffer fish, a lionfish and a snowflake eel all in one day… That has to be a record of how many exotic creature we found in one day!

We were almost back on dry land when Tom stopped us dead in our tracks, luckily he spotted the eel, we were literally heading straight for it and if Tom didn’t see it might even have stepped on…

We switched the GoPro on to try film it – wasn’t aware about how it loves the camera spot light. It left it’s sunbathing spot to come show off to the camera, but obviously a wild animal swimming straight to you especially with razor sharp teeth usually means RUN!!!!

Like I mentioned before, we chose the smallest, shallowest, nearest rock we could find… I think the people that saw us standing on this tiny rock must’ve thought we were crazy!

Our eel was not very happy, if it really wanted to, it could’ve grabbed one of our legs, but instead it swam as close as possible to rock and swam past us…

We later watched the video of this encounter, unfortunately nothing worth showing, but we figured out the poor eel was just so excited to have it’s picture taken and was really just tryna pose for the camera…

I think this poor Eel was very disappointed in us for running away from it and got mad tryna get one more shot of it’s self in the camera… We have heard of a really friendly moray Eel that loves the attention of cameras, obviously we always thought the eel lived in the open deep water seas, where all the Scuba divers go to swim… But now we know it likes to visit the snorkelers as well…

The worst part about it all was that while doing some homework about these creatures to my article – I found out all though they might be dangerous, they don’t really care to hunt during the day and will much rather sleep or sunbathe than attack anything… You really have to annoy the poor creature for it to even think about fighting you off in the day time – although night time is an entire different story, you don’t wanna be mistaken for food…

Next time I encounter a Honeycomb Moray Eel, I will definitely be cautious, but not so afraid to give it, it’s 15 seconds of fame… 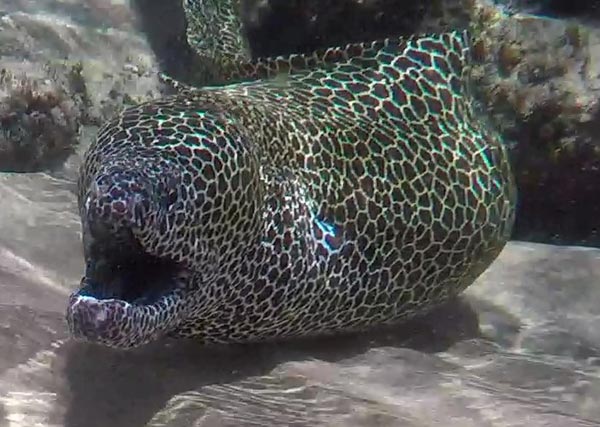 A few Fun Facts about these beautiful creatures:

Our factual sources for this article came from: Wikipedia and Sea Unseen

Send us an email about any exotic or scary encounters you have had under the water or on land and your story might go viral!

Also check out our YouTube Channel when you done reading this… Every view is one step closer to our goal, we need 4000 hours of our subscribers views and 1000 Subscribers to be able to start making money and better content for you guys, YouTube is free please watch all our videos till the end… and subscribe – It’s Free – if you haven’t already and don’t forget to share the video when you done.

This website uses cookies to improve your experience while you navigate through the website. Out of these cookies, the cookies that are categorized as necessary are stored on your browser as they are as essential for the working of basic functionalities of the website. We also use third-party cookies that help us analyze and understand how you use this website. These cookies will be stored in your browser only with your consent. You also have the option to opt-out of these cookies. But opting out of some of these cookies may have an effect on your browsing experience.
Necessary Always Enabled
Necessary cookies are absolutely essential for the website to function properly. This category only includes cookies that ensures basic functionalities and security features of the website. These cookies do not store any personal information.
SAVE & ACCEPT
Please contact us for more Information...